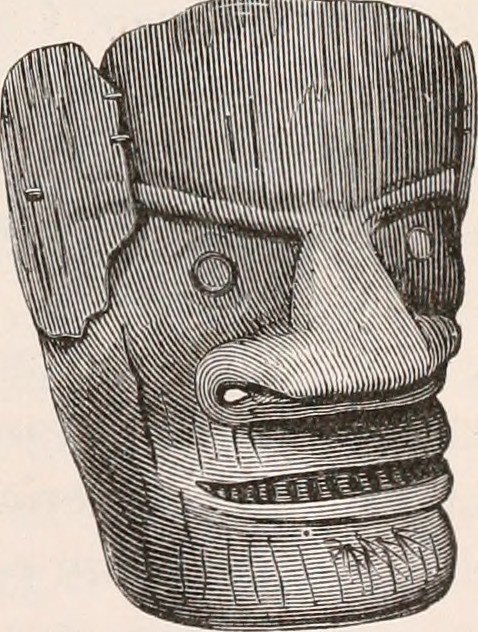 Of the Aleuts it is said that their rites showed a much higher religious development than was to be found among any of their neighbors; the labors of the Russian…

Of the Aleuts it is said that their rites showed a much higher religious development than was to be found among any of their neighbors; the labors of the Russian priests have, however, been successful enough among them to obliterate all remembrance of aught but the outlines of their ancient cult. They recognize a creator-god, but without worshipping him; he had made the world, but he did not guide it; men had nothing to do any longer with him, but only with the lesser kugans, or spirits, to whom the direction and care of earthly affair have been committed.

The stars and the sun and the moon were worshipped, or the spirits of them among others, and avenged themselves on those that adored them not. The offended sun smote the eyes of a scoffer with blindness, the moon stoned him to death, and the stars constrained him to count their number—hopeless task that always left the victim a staring maniac.

The shamans do not seem to have enjoyed that distinction among the Aleuts that their monopoly of mediation between man and the invisible world gave them among other nations. They were generally very poor, living in want and dying in misery; they had no part nor lot in the joys or sorrows of social life: never at feast, at wedding, or at a funeral was their face seen. They lived and wandered men forbid, driven to and fro by phantoms that were their masters, and not their slaves.

The Aleuts had no permanent idols, nor any worshipping-places built with hands: near every village was some sanctified high place or rock, sacred as a Sinai against the foot of woman or youth, and whoever profaned it became immediately mad or sick to death. Only the men and the old men visited the place, leaving there their offerings of skins or feathers, with unknown mysterious ceremonies.

The use of amulets was universal; and more than shield or spear to the warrior going to battle was a belt of sea-weed woven in magic knots. What a philosopher's stone was to a Roger Bacon or a Paracelsus was the tkhimkee, a marvellous pebble thrown up at rare intervals by the sea, to the Aleutian hunter. No beast could resist its attraction; he that carried it had no need to chase his prey, he had only to wait and strike as the animal walked up to its death. Another potent charm was grease taken from a dead man's body; the spear-head touched with this was sure to reach a mortal spot in the whale at which it was hurled.

There are dim Aleutian traditions of certain religious night-dances held in the month of December. Wooden idols, or figures of some kind, were made for the occasion, and carried from island to island with many esoteric ceremonies. Then was to be seen a marvellous sight. The men and women were put far apart; in the middle of each party a wooden figure was set up; certain great wooden masks or blinders were put on each person, so contrived that the wearer could see nothing outside a little circle round his feet. Then every one stripped, and there upon the snow, under the moonlight, in the bitter Arctic night, danced naked before the image—say rather before the god, for as they danced a kugan descended and entered into the wooden figure.

Woe to him or to her whose drift-wood mask fell, or was lifted, in the whirl of that awful dance; the stare of the Gorgon was not more fatal than a glance of the demon that possessed the idol; and for any one to look on one of the opposite sex, however it came about, he might be even counted as one dead. When the dance was over, the idols and the masks were broken and cast away.

It may be added that such masks as this were needed, even by prophets in their interviews with the great spirits that know all mortal consequences; and that when a man died, such a mask was put over his eyes. O naked and shivering soul, face to face with the darkest kugan of all, we will shelter thee what we can!