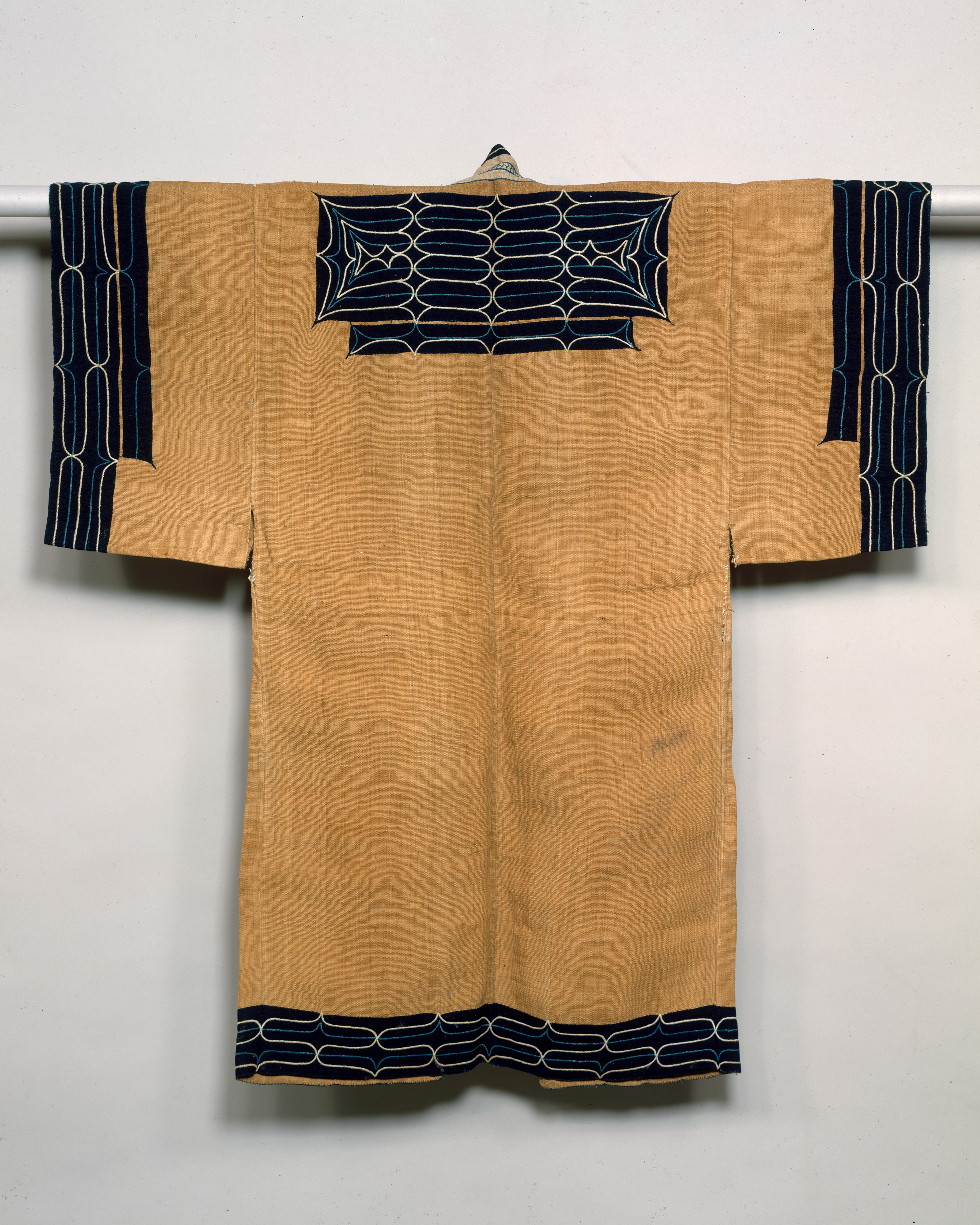 A short summary of some of the traditional clothing arts of Ainu people.

The traditional clothing of Ainu people is the attush robe, worn by both genders. Attush is a fabric made from the soft inner strips of elm bark. Women collected the bark in spring and soaked it until it separated into fibers. It could then be woven into fabric and sewn into a robe using bark thread. Linden bark and nettles were treated in a similar way to make a white fabric. White robes were most commonly worn by the Sakhalin Ainu.[1][2]

Women decorated attush robes with appliqué and embroidery. Men's robes were more elaborately embroidered. Their patterns identified a person's status, gender, and home village. Additionally, the embroidery protected its wearer from the influence of hostile spirits. A fine attush coat could take as much as a year to make.[3]

Besides attush, historical Ainu people also made clothing from furs, bird skins, and salmon skin. Salmon-skin shoes provided extra traction on icy shores, and 50 or more fish could be used to make a single coat. Men and women both wore leggings beneath their robes. Women also wore a sacred girdle, or upshoro kut, that traced her matrilineal line.[4] They might also wear headbands or shawls. In summers, many people went barefoot or wove light sandals. Winter boots were lined with fur or straw, and snowshoes made travel easier.[5][6]

As the Ainu became more reliant on Japanese goods, the attush robe was gradually replaced by more convenient cotton. Chikakarpe clothing featured more elaborate appliqué and embroidery. It came in solid colors, usually blue, or in the same patterns seen in Japanese kimonos. For Ainu men, the outfit was completed by a ceremonial sword and a sacred crown woven from wild grapevines.[2][7]

At first, Ainu people were generally forbidden from wearing Japanese clothing to keep their cultures separate. Eventually, however, the laws were reversed, and many Ainu people transitioned to Japanese fashions to avoid persecution. Most Ainu people continue to wear Japanese-and Western-style clothing, but they often still keep ceremonial outfits for formal occasions. Ainu women in particular are credited with saving the art of Ainu sewing and embroidery.[8][9]