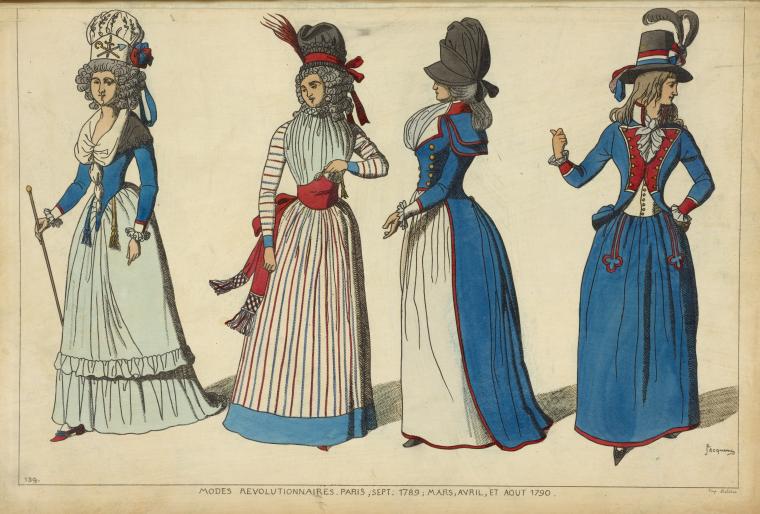 Fashions of the French Revolution

A look at how the French Revolution changed French fashion trends almost overnight.

Between 1789 and 1799, France experienced a period of monumental upheaval known as the French Revolution. After playing a crucial role in the United States’ Revolutionary War against Britain, the same Enlightenment philosophy energized the struggling French middle class and peasantry. The common people of the time faced food shortages paired with heavy taxation, all while the aristocracy enjoyed lavish luxuries. Discontent combined with a republican spirit ignited the powder keg. On July 14, 1789, revolutionaries stormed the Bastille, an armory and prison, and kicked off the Revolution.

There followed ten years of violence, uncertainty, and infighting, which ended with the infamous rise of Napoleon Bonaparte. But even through the turmoil, the French Revolution’s republican ideals survived. Today, after facing various invasions, imperial coups, and reforms, the French Fifth Republic stands.

The French Revolution profoundly influenced the history of France, as well as the many European and colonial nations that followed suit. It also left a visible legacy in the fashions of the time. Almost overnight, the elaborate outfits of the aristocracy became not only outdated, but dangerous. Any sign that you might be a counter-revolutionary, supporting the Ancien Régime, could be enough to send you to the guillotine.

Compare the above costumes to those below. The top outfits are revolutionary in spirit, sporting the red, white, and blue that symbolized French republicanism. Below are a few outfits typical of well-to-do women of the 1770s. Note the simplicity of the revolutionary dresses—a trend that would also be seen in male fashions. 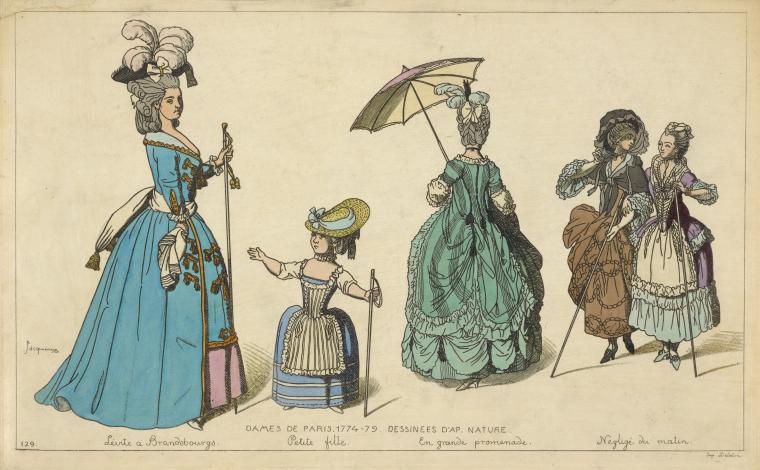 Not all frivolity was tossed aside, however. These eye-catching hairstyles and hats still adorned ladies’ heads, though they usually nodded to the red, white, and blue color scheme. 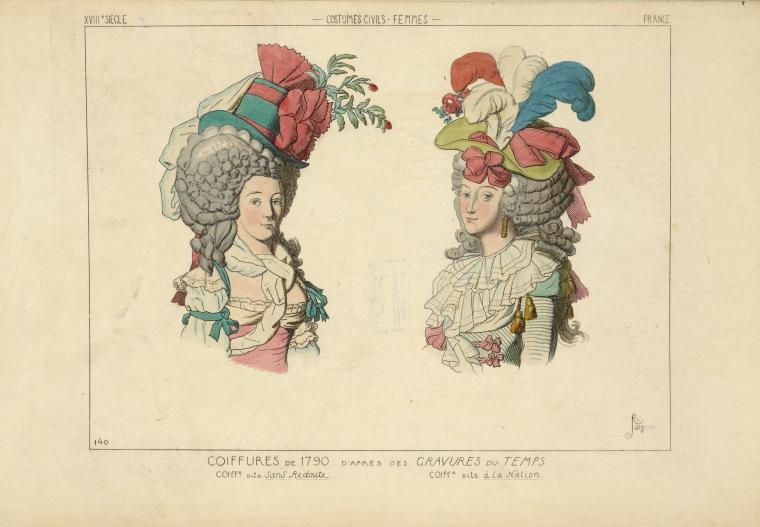 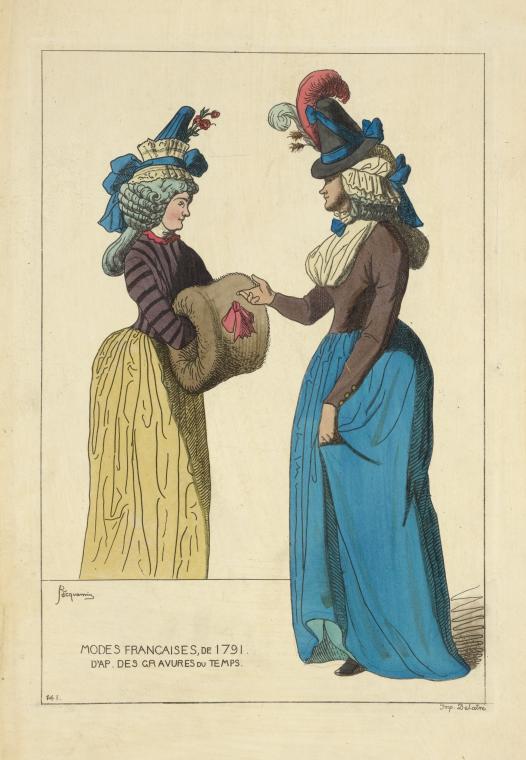 Men’s fashions followed a similar pattern. Powdered wigs and faces became a legacy of the aristocracy. Colorful silks and lace gave way to plainer cotton, and tight trousers with stockings were mostly dropped in favor of wide-legged pants. The headgear seen below is the Phrygian cap, also known as a liberty cap or bonnet rouge. The red cap, which has its roots in the Ancient Greek and Roman worlds, represented liberty and equality. 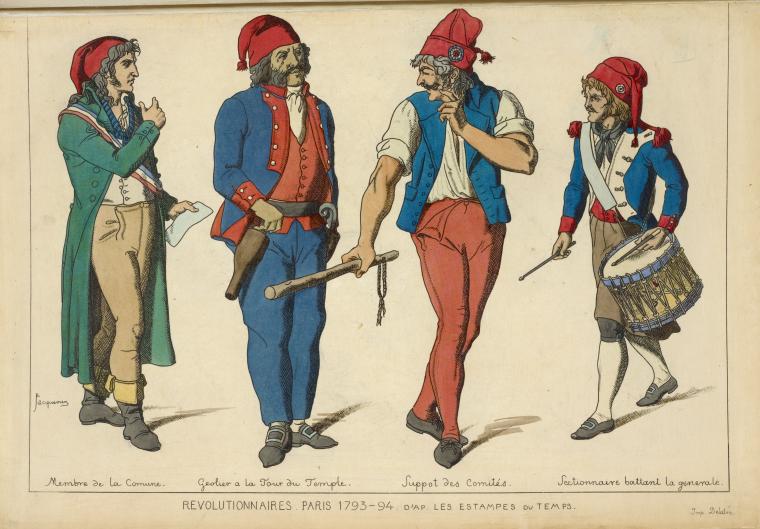 Note how the outfits above compare to the uniforms of French revolutionary soldiers: 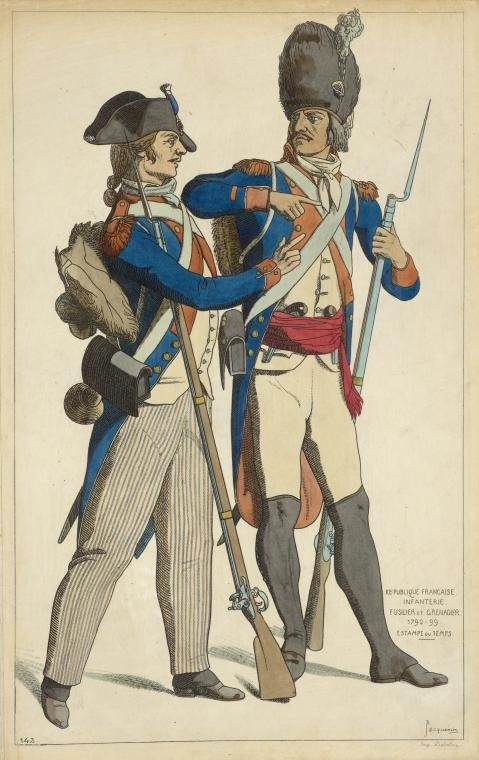 After the first wave of guillotine purges had removed most of the French aristocracy, France endured the Reign of Terror. During this time, mainly under the leadership of Maximilien Robespierre, revolutionary factions turned against each other while continuing to hunt down former nobility. Almost 20,000 people died during this time, including Robespierre himself, who was executed by guillotine in 1794. The shift away from the Reign of Terror is known as the Thermidorean Reaction.

The next stable government, the French Directory, attempted to return to a more stable state. It governed France between 1795 and 1799, ending with the rise of Napoleon Bonaparte. Fashion, which had grown understandably subdued under the Reign of Terror, began to branch out again. We see here the start of the Napoleonic fashion era. Women adopted the Neoclassical look, calling back to Greek and Roman dress with light colors, high waists, and elegant drapery. Men, meanwhile, continued to wear more practical clothing than their pre-revolutionary counterparts. 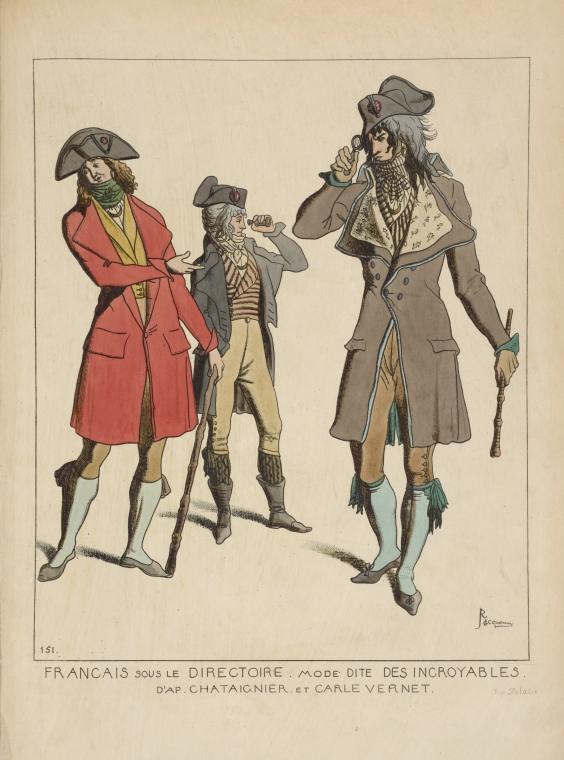 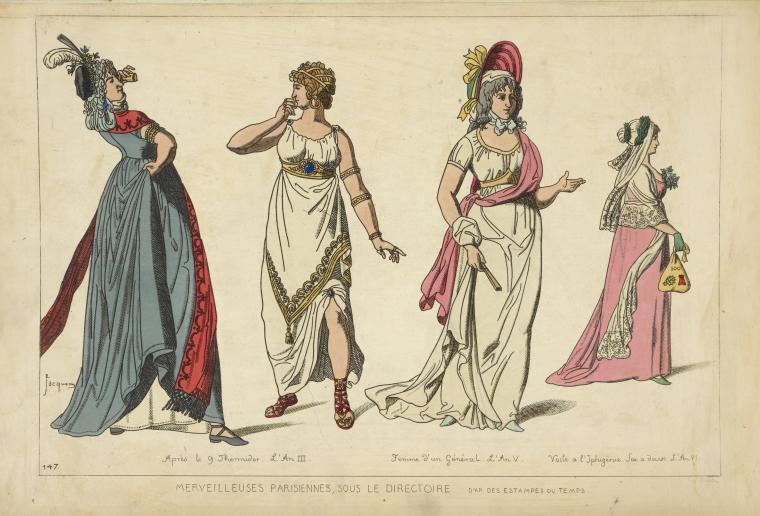 And so, within just 10 years, the styles of France changed as dramatically as its governments. Although it may seem frivolous, there’s much we can learn through the ways people choose to express themselves in times of stress and upheaval. And thanks to the eternal influence of French fashions, you may have more than a few items in your own wardrobe that owe their evolution to these revolutionary spirits.