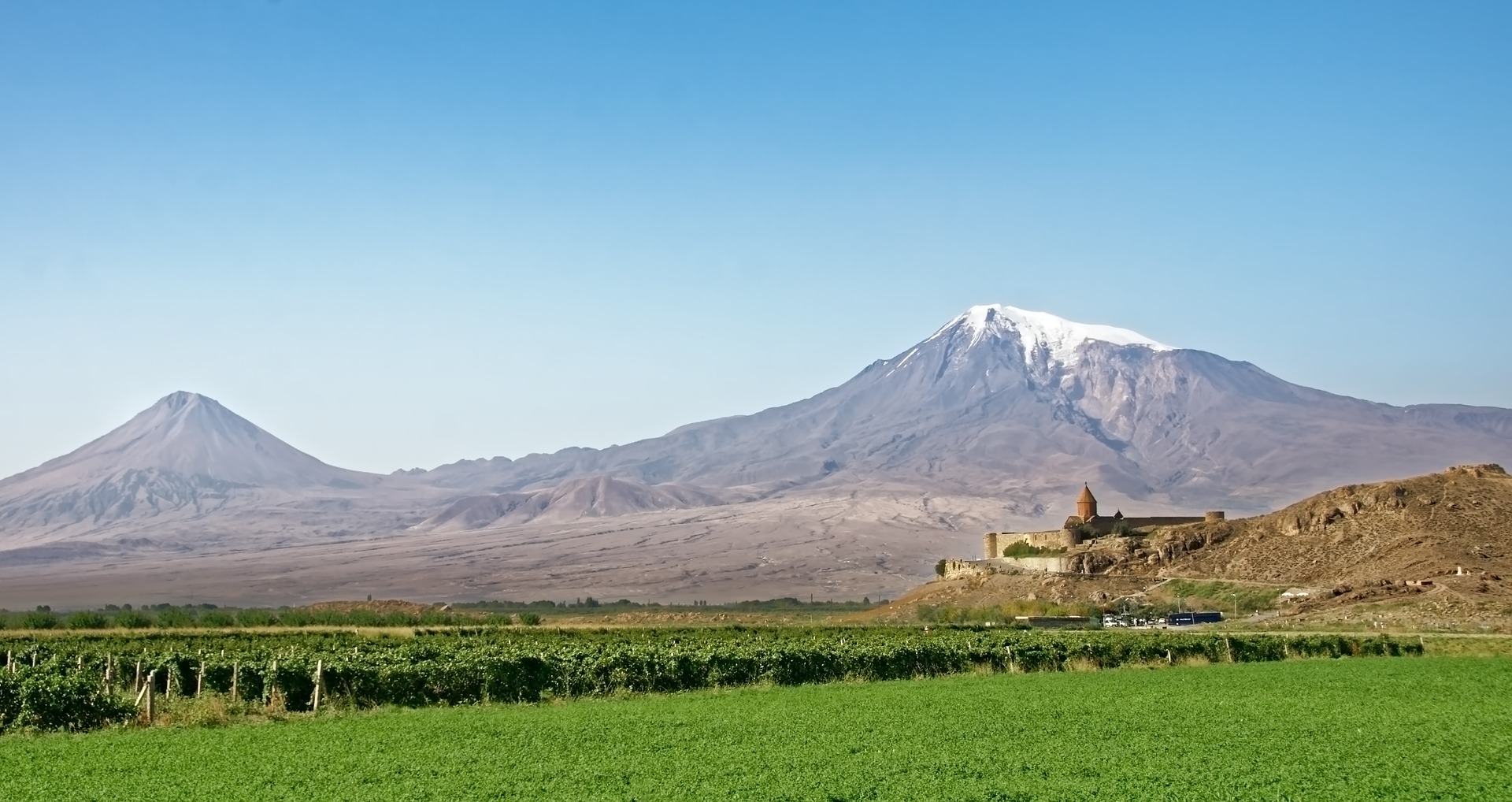 "Such is the mountain about which a thousand legends cluster..."

“Ararat,” from Armenian Legends and Festivals by Louis Boettiger, 1920.

"In the seventh month, on the seventeenth day of the month, the ark rested upon the mountains of Ararat." Every Armenian, and others, too, believe that this is the Ararat of Armenia, or Masis as it is called, and it is true that there is absolutely nothing to disprove such a belief. James Bryce has given a careful consideration to the question, and states in conclusion that full liberty is left to the traveler to consider the "snowy sovereign of the Araxes plain" to be the true Ararat. There are several points that may be noted. First, there is nothing in the statement of Genesis to show that the Ararat mentioned was a mountain called by that name; it seems rather that Ararat was a section of country, for the passage states that the ark rested "upon the mountains of Ararat." In the second place, the mountain is not called Ararat by Armenians, but Masis. And thirdly, there is no independent Armenian tradition of the flood so far as is known, for it can not be shown that the modern tradition is older than the Christian era.

These facts would be conclusive evidence that Armenian Ararat is not the traditional Ararat of the Old Testament, were it not, first, for the fact that there was in the region of the mountain a province of Airarat which in all probability corresponds to the biblical Ararat. Secondly, the biblical Ararat unquestionably corresponds to the Assyrian Urarthu which is the section of country about Lake Van and Mount Ararat. So that, although not absolutely conclusive, the Armenian tradition enjoys a very high degree of probability.

In this connection the legend of the village of Nakhitchevan is worth noting. It is situated just to the north of the mountain on the left bank of the Araxes. Armenians believe it to be the place where Noah first landed, and as proof, the name of the village, which means, "the first place of landing," is cited. One might suppose the name to have been given by the Christians after the conversion to Christianity, were it not that Ptolemy places in the same spot a city named Naxuana which is the exact Greek for the Armenian name. Also Josephus, fifty years before Ptolemy speaks of the place, as quoted by St. Martin; "Les Armeniens appellent ce lieu l'endroit de la descente parce que c'est la que l'arche trouva un endroit de salut, et qu'encore actuellement les indigenes montrent ses debris."

Tavernier who traveled through the country along about 1700 speaks of Nakhitchevan as the "oldest city of the world" and gives the tradition. But many Jews, who undoubtedly gave the village its name, lived in Armenia, long before the Christian era.

Situated on a broad plain four or five thousand feet above sea level, Ararat rises majestic and solitary to a height of 17,000 feet. There are no lesser peaks or ranges to destroy the grandeur of the effect. Except for its companion, Little Ararat, which rises beside it on a common base to a height of 12,840 feet, it stands alone as monarch of the broad plain it surveys. Little Ararat is in the form of a perfect cone, whereas Ararat is broad-shouldered and dome-shaped, supported by huge buttresses and capped with snow a considerable distance down the slope through the entire year. It is truly symbolic of strength and majesty.

Such is the mountain about which a thousand legends cluster. Marco Polo says of the mountain: "There is an exceeding great mountain on which it is said the ark of Noah rested, and for this cause it is called the mountain of the Ark of Noah." In 1254, a little before Marco Polo's time, a Franciscan friar, William of Rubruck passed by the mountain upon which the ark is said to have rested, which mountain, he said, could not be ascended, though the earnest prayers of a pious monk prevailed so far that a piece of the wood of the ark was brought to him by an angel, which piece, he said, is still preserved in a church near by as a holy relic. He gives Masis as the name of the mountain and adds that it is the Mother of the World. According to a Persian tradition it is called "Cradle of the Human Race."

Still more interesting is the account by Sir John Maundeville, part of which runs as follows:

"Fro Artyroun go men to an Hille, that is clept Sabisocolle. And there besyde is another Hille, that men clepen Ararathe: but the Jews clepen it Taneez, where Noas Schipp rested: and zit is upon that Montayne and men may see it a ferr in clear wedre: and that Montayne is well a myle high. And sum men seyn that they have seen and touched the Schipp; and put here Fyngres in the parties where the Feend went out when that Noe seyd 'Benedicta.' But they that seyn such Wordes seyn here Willie, for a man may not gon up the Montayne for gret plenties of Snow that is alle weys on that Montayne nouther Somer ne Winter: so that no man may gon up there: ne never man did, sithe the time of Noe: Saf a Monk that be the grace of God brought one of the Plankes down, that zit is in the Mynstre at the foot of the Montayne. And beside is the Cytes of Dayne that Noe founded. And faste by it is the Cytee of Any, in which were 1000 churches. But upon that Montayne to gon up this monk had gret desir. and so upon a day he went up and when he was the third part of the Montayne he was so wery that he mighte not furthere, and so he rested him and felle to slep, and when he awoke he fonde himself liggyie at the foot of the Montayne. And then he preyde devoutly to God that he wold vouch saf to sufire him gon up. And an angelle cam to him and seyde that he scholde gon up; and so he did. And sithe that Time never non. Wherefore men scholde not beleeve such Woordes."

The legend of the monk is usually given in a form which confirms still more the sacredness of the mountain. St. Jacob, as the monk was named, tried three successive times to climb the mountain. Each time he fell asleep intending to resume his journey the next morning, only to wake up finding himself at the same point he had started from the preceding day. An angel came to him after the third time, and told him that God had forbidden mortal foot ever to tread on the sacred summit, but that he should be given a fragment of the ark in which mankind had been preserved as a reward for his devout perseverance. This treasure is still preserved at Etchmiadzin and the saint is commemorated by the little monastery of St. Jacob, which till 1840, when a tremendous shaking of the mountain showered the little monastery with rocks of destruction, stood above the valley of Arghuri on the slopes of Ararat. .

The little village of Arghuri, the single village on the mountainside, was the city of Noah's vineyard, and contained a little church which is said to hallow the spot where Noah first set up an altar. But this village too, was completely destroyed by the avalanche of 1840. Not the slightest trace of it remains, though only three years before its destruction, Dubois de Montpereux visited the little city and described it together with the church of Noah, Noah's vineyard, and the monastery of St. Jacob. In the garden of the city were planted pear trees, apple, plum, cherry, apricot, peach, and nut trees. This very garden was the site of the first vine on which the old patriarch became drunk, and the inhabitants showed Dubois some bits of creepers to prove it. "Dieu," they said, "pour punir les ceps qui avaient ainsi entraine le pauvre patriarche dans le peche, les condamna a ne plus porter de raisins."

Naive, yes, but very sweetly so. And the church, the people said, marked the place where Noah offered his first sacrifice after the deluge. Except for the garden of Arghuri, wrote Dubois, this great mountain was absolutely destitute of verdure; an old stunted willow, wound about with snow and ice was the only other exception to this. According to the legend, it marked the spot where a board of Noah's ark had taken root and sprung up into a living tree which the people venerated. One was not permitted to take away even the smallest of its feeble branches.

All of this was blotted out so completely by the shower of falling rocks and boulders that it is hard to imagine the places as ever having existed. The primeval willow, the vineyard, the sacred church, and the little monastery of St. Jacob have left not the slightest trace. The bell of the old church is no more heard; the Christian service is not chanted any longer on the sacred mountain of the Ark.

Of the numerous other legends associated with the mountain I shall mention only two. One of them regards the summit of the mountain as the site of Chaldean star-worship, and asserts that a pillar with a figure of a star stood upon it. According to the same legend, twelve wise men stood beside the pillar to watch for the star of the East, which three of them followed to Bethlehem.

The other is in respect to the spring situated above the spot where stood the monastery. A bird, called by the Armenians tetagush, feeds on the locusts which are such a plague to the country, and curiously enough, the bird is attracted by the waters of the spring. When the locusts appear, the people carry their bottles to the spring and filling them with the peculiarly charmed water, take them back to their fields where they are placed on the ground to attract the tetagush. The people of Syria and Palestine were much in need of tetagush and Ararat spring water during the spring and summer of 1915, for the swarms of locusts not only devoured the crops but also the leaves and barks of the trees.

Boettiger, Louis A. Armenian Legends and Festivals. University of Minnesota, 1920.