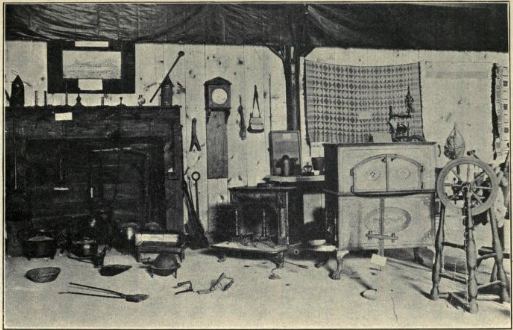 The First Settlers of Upper Canada

One of the unexpected outcomes of the Revolutionary War was the effective settlement of what afterwards became known as Upper Canada.

From Pioneer Life among the Loyalists in Upper Canada by Walter Herrington, 1915.

One of the unexpected outcomes of the Revolutionary War was the effective settlement of what afterwards became known as Upper Canada. Up to that time the greater part of this rich territory was a wilderness, to which the white man had attached little value, except in respect to the part it played, through its chain of forts, in giving access to the great fur-producing tracts of the interior of the continent. Although the French governors had frequently advocated the introduction of settlers into this part of Canada, with a view to establishing the supremacy of France more securely upon the Great Lakes, very little had been accomplished in that direction.

The net result was a few military posts along the border and a French settlement in the neighbourhood of Detroit. The entire European population grouped about a few centres did not exceed 2,000. Throughout the rest of this territory, where now we find busy towns, thriving villages, and well-equipped farms, one might have travelled for weeks without meeting a human being, save, perhaps, a solitary trapper, with a small bundle of peltries upon his back.

That the rich farm lands of what is now the banner province of Canada were apparently so long overlooked might appear strange, if we do not bear in mind that there was no shortage of territory well adapted to agricultural purposes on the Atlantic seaboard and on the lower St. Lawrence. It must also be remembered that the fur trade had for nearly two centuries held first place in the regard of the governing bodies of Canada, and that little care was bestowed upon the agricultural possibilities of the lands bordering upon the Upper St. Lawrence and the Great Lakes.

The manner in which the settlements were begun was more remarkable than the long delay in beginning them. In most instances, new territories have been opened up for settlement by a few hardy pioneers, whose numbers were added to, year after year; but here we have a whole colony, coming in as one body, taking up all the desirable lands in the front concessions of a score of townships.

The Loyalists were above the ordinary type of emigrants who, too frequently, having made a failure of life in their native surroundings, seek other fields in which to begin anew their struggle for existence. When the thirteen British colonies declared their independence, there were many thousands of their best citizens, men of means and influence, who looked upon the British flag as their best safe-guard of freedom and justice, and they declined to take up arms against their Motherland. Their loyalty brought down upon their heads the wrath of the leaders of the revolutionary movement. Their property was confiscated, some were thrown into prison, and, in a few instances, the death penalty was inflicted, for no other offence than their allegiance to the British Crown.

In the face of such threatened dangers thousands rallied to the standard of the king, and many more, who for various reasons, did not enlist in the army, made no secret of their loyalty to their sovereign. When hostilities were concluded, the persecutions still continued, and the Loyalists found themselves little better than outcasts from their own homes. Giving up all hope of regaining their property or receiving compensation for their losses, they set about to seek new homes under the flag for which they had sacrificed so much.

Thousands went to England, many more thousands emigrated to the British West Indies, Nova Scotia, and what is now New Brunswick, and large numbers were attracted to the rich farm lands in that territory which was afterwards known as Upper Canada.

In the autumn of 1783 a great body of emigrants sailed from New York, and, coming around through the Gulf of St. Lawrence, wintered at Sorel, in the present province of Quebec. In the following June they proceeded by means of flat-bottomed boats, to the land provided for them. By far the greater number settled in the new townships laid out, under instructions from Governor Haldimand, on the St. Lawrence, and as far west as the head of the Bay of Quinte. Only a few went farther west and settled in the neighbourhood of Niagara and Detroit.

During the next four years straggling bands of one or more families came by different routes to share the fortunes of the first great army of settlers, and the strictest care was exercised by the authorities to see that none but those who had demonstrated their loyalty to the British cause were admitted to the new settlements.

The appellation "United Empire Loyalist" was not conferred indiscriminately upon all applicants, but was a "Mark of Honour" bestowed only upon those who had taken their stand for the unity of the Empire, and who had allied themselves with the Royalists before the Treaty of Separation in 1783. The terms of the proclamation creating this new Canadian aristocracy were broad enough to embrace practically all of the first settlers of 1784, and those who arrived during the succeeding four years.

In 1788 representations were made to the governor, Lord Dorchester, that there were across the border many relatives of the Loyalists, and other persons, who, although they had not joined the royal standard, were favourably disposed towards the British. With the view of securing a further body of desirable settlers, Lord Dorchester gave instructions that all applicants, who upon examination proved to be unexceptionable in their loyalty and good character, should be given certificates of location for lots of not more than two hundred acres to each; but upon the express condition that they should become bona fide settlers. Never were the portals of a new settlement more scrupulously guarded. None but the strong and determined would in any event venture north to hew out a home in the forest, and the government took good care that only those who were likely to become good citizens were admitted.

When, by the Constitutional Act of 1791, the separate provinces of Upper and Lower Canada were created, the lieutenant-governor of Upper Canada, John Graves Simcoe, threw the gate wide open and issued a proclamation inviting emigrants to enter the new province, without any adequate provision for enquiring into their loyalty or character. Among those responding to the governor's invitation were some who had actually borne arms against the king. Many of the Loyalists resented this lack of discrimination and complained that the favours, which should have been reserved for those only who had remained faithful in their allegiance to the king, were being showered upon his enemies.

These criticisms upon the character of the new-comers were, no doubt, well merited in some cases; but, whatever views they may have entertained during the stormy days of the revolution, they could have had only one object in coming to Canada, and that was to better their condition. They did not need to be told that their interests were identical with those of the earlier settlers who had entered the country at a time when it was more difficult to gain admission. They were not entitled to receive the "Mark of Honour", but before many years had passed all differences had been forgotten and they and the Loyalists worked together for the common good.

The main body of Loyalists, the settlers of 1784, to the number of about ten thousand, came in organized bands, some being remnants of the battalions that had been engaged in the war, and, in some cases, they were under the command of the same officers whom they had followed while upon active service. They, however, were not military organizations in the sense in which we view the term to-day; they were not fighting machines, but were bent upon a peaceful mission. In anticipation of their coming, the government surveyors had been busy for months in laying out the townships.

The newcomers were experienced farmers, and understood well the advantages of a home upon the shores of a body of fresh water. In a country, where as yet there were no roads, the water afforded an easy means of communication by boats in the summer, and by sleds upon the ice in winter. They also looked forward to the future, when their flocks and herds, pasturing upon the cleared lands, could find abundance of water to drink without leaving their enclosures. Many of them had previously lived near to the bays, lakes, and rivers of their native States, and had learned to love the companionship of the water.

The longer one has lived upon the banks of a stream or the shores of a bay, the more loath is one to live amid surroundings of a different character. There is a charm about the presence of the water which baffles any effort to describe it. There is a sublime majesty about a mountain, a weird loneliness about a desert, an appealing mystery about a prairie, but a body of water, particularly a small navigable one, seems to comport with all one's moods.

It would have been difficult to convince some of our pious and sainted grandmothers that our lakes, bays, and rivers did not leave their moral effect upon those who lived along their shores. Who is so dead to the influences of his surroundings that he has not stood spell-bound upon the shore as the boisterous waves broke with an angry roar at his feet? No sooner has one wave spent its energy than another, with a fury as relentless, rushes madly forward, followed by countless others; and yet there is no apparent loss of power. Or who could sit unmoved, upon a moonlight night, and look upon the silver sheen upon the placid bosom of the water, and not feel the inspiring presence of that grand object lesson of "Peace! Perfect Peace!"? Why should it not be a part of the divine plan of the Creator to mould our characters by these evidences of His power and omnipresence?

Herrington, Walter S. Pioneer Life among the Loyalists in Upper Canada. The MacMillan Company of Canada, 1915.

A collection of firsthand accounts from the settlers, pioneers, and indigenous peoples of the modern United States. Please feel free to follow and contribute!