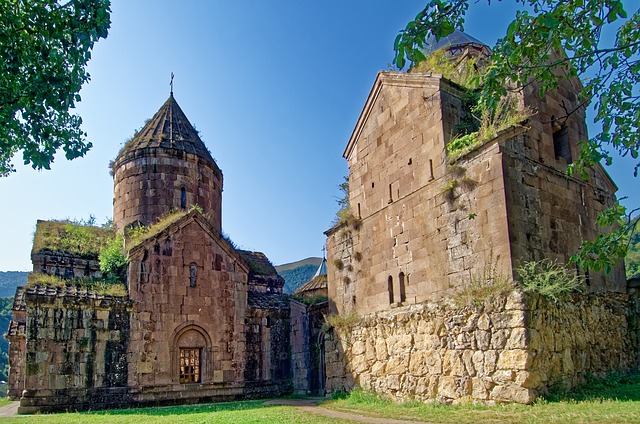 Long before Christianity became the state religion of the Armenians (301 A. D.), the faith had been implanted and had been growing among the people in general. Persia obtained control…

From The Story of Armenia by Matthias R. Heilig, 1920.

Long before Christianity became the state religion of the Armenians (301 A. D.), the faith had been implanted and had been growing among the people in general. Persia obtained control of Armenia in 232 A. D.; a massacre of the royalty followed and only one heir to the throne escaped—Tiridates, a son of Chosroes. He fled to Rome; and obtaining favor there, he was helped by the Romans to the Armenian throne in 259 A. D. His first royal act was to persecute the Christians. Among many other Christians, St. Gregory, called “the Illuminator," a prince of the Arsacid family, was cast into prison. But Tiridates, supposing himself to have been cured of a serious malady by the saint, embraced Christianity; and so did most of his people.

Now the Persians were Zoroastrians—that is, "Fire Worshipers"—and they resented the introduction of Christianity as the state religion of their neighbors. As a result Armenia became the theater of an almost uninterrupted warfare between Persians, Armenians, and Romans. Whenever Persia got the opportunity, she imposed heavy tribute and inflicted cruel persecutions upon the Armenians. And Rome, under Emperor Maximianus, according to the early Christian historians, declared war against Armenia for this one cause alone—that the detested Christian religion had been adopted. But relief in this quarter came when Emperor Constantine became a Christian, about 313 A. D.

The Character and Accomplishment of Early Armenian Christianity

The Armenians had ample opportunity to forecast the tragic consequences of adopting a religion hated by their political adversaries. Their choice was deliberate. They became the heroic champions and defenders of an exalted life-principle with a clear consciousness of what material advantages they forfeited. They have remained for fifteen hundred years the advocates of Christianity, loyal and constant, even through periods of persecution and depression, when, had the Armenians failed the whole cause which they defended might have failed.

There are three outstanding features in connection with Armenia's acceptance of the new religion. First, she did not wait until Christianity had been adopted by Rome or Byzantium, nor did she wait for the approval of imperial Rome, nor for the consent of Persia. Secondly, the Church which Armenia established was and has always remained an independent Church, “In spite of persistent overtures from both the Roman and the Greek Churches, and the practical advantages which might naturally have accrued from alliance with either." Thirdly, the Church in Armenia assumed at once a very democratic character. The clergy were always elected by popular vote.

In the ninth century a sect called the Paulicians came out of Armenia into Thrace. They were called “Cathari" or Puritans. Later, in the twelfth century, their principles found expression in the Albigensian or Waldenses movement in Languedoc, France. A struggle was brought about by the crusade against the Albigenses by Pope Innocent III (in 1208), in which the “heretics" were practically exterminated. Their spirit, however, lived on. Thus the first germ ideas of the great Reformation and Renaissance of the sixteenth century may be traced back to the Armenians, who were the first to insist upon the principle that the individual has a right to a free conscience and a right to be heard in civil and religious matters. 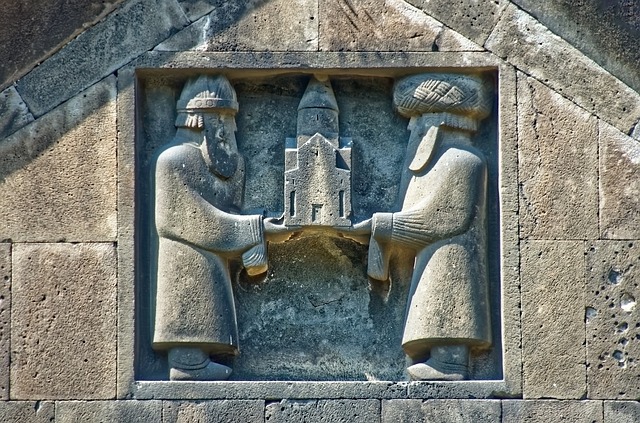 Effects of Christianity Upon the Armenian Artistic Temperament

It was a tremendous trick of fate to put such a people in such an environment as that in which we find the democratic and loyal-natured Armenians. In weakness and in strength, in pagan days and after their conversion, in peace and in war, the Armenians have stood up for their ideals. History does not record a similar instance of such constant devotion to heroic principles under such continuously desperate circumstances.

One regrettable fact in connection with their adoption of Christianity is their destruction of the old harmless relics of pagan glory—the elaborate altars and temples, the images and golden statues, the libraries and invaluable old records.

But in the place of the pagan arts a noble Christian art sprang up. This energetic and practical people showed an unusual talent architecturally and musically. And in literature they displayed the true fruits of the new spiritual and intellectual creativeness which the new religion had inspired in them.

Early in the fifth century they had completed the translation of the Bible (the famous ''Armenian Version"); and with miraculous rapidity and thoroughness a classic Armenian literature sprang into being. It was written in a new alphabet (ascribed to Miesrob, and consisting of thirty-eight letters), invented because the alphabets formerly used by them, the Syriac, Greek, and Pelhevi, were considered inadequate fittingly to set forth this wealth of new thought which cried for extensive and intensive expression.

To the Armenians' zeal in literary study, translation, and creation, we owe the preservation of some precious things of which the originals have perished—such as Aristotle's “Philosophical Definitions," the "Chronicles" of Eusebius, "Homilies" by St. Chrysostom and Basil the Great, and some of the works of Philo, Bardesanes, Faustus of Byzantium, and Lerubna of Edessa.

As Defenders of the Faith

The marked preference which the Armenians showed for western ideas and alliances, as well as the startling awakening and progressiveness which the adoption of Christianity had effected, provoked the bitter hostility of Persia.

In the middle of the fifth century Persia demanded of Armenia that she renounce Christ and worship Fire. King Hazgherd (or Yesgerd) of Persia and his huge army swarmed over the borders and declared a religious war. His decree was: “All peoples and tongues throughout my domain must abandon their heresies and worship the Sun." When the grand vizir, Mihermish, wrote to the Armenians making some absurd charges against Christianity, the Armenians replied, saying among other things: “No one can move us from our belief, neither angels nor men, fire nor sword. Here below we will choose no other God, and in heaven no other Lord but Jesus Christ.''

It was an easy matter to collect an Armenian army. A Holy League was formed. It originated in a popular movement. It was a democratic action. The war was considered a people's war.

On the plains of Avaraye (or Avarair), by the river Dughmood, not far from the beautiful Van, the armies clashed. (451 A. D.)Prince Vartan Mamigonian, in command of the Armenians, after kneeling in prayer, thus addressed his men: "Soldiers, as Christians we are averse to fighting, but to defend our religion and our freedom we must fight. Surely our lives are not as valuable as the life of Christ. If He was willing to die on the cross for us, we ought to be willing to die in battle for Him."

Immediately the order to charge was given. Though greatly outnumbered, the Armenians rushed into battle with such fury and determination that they swept the haughty Persians from the field. Unhappily, Prince Vartan was mortally wounded. Persia never again attempted to force her religion upon Armenia.