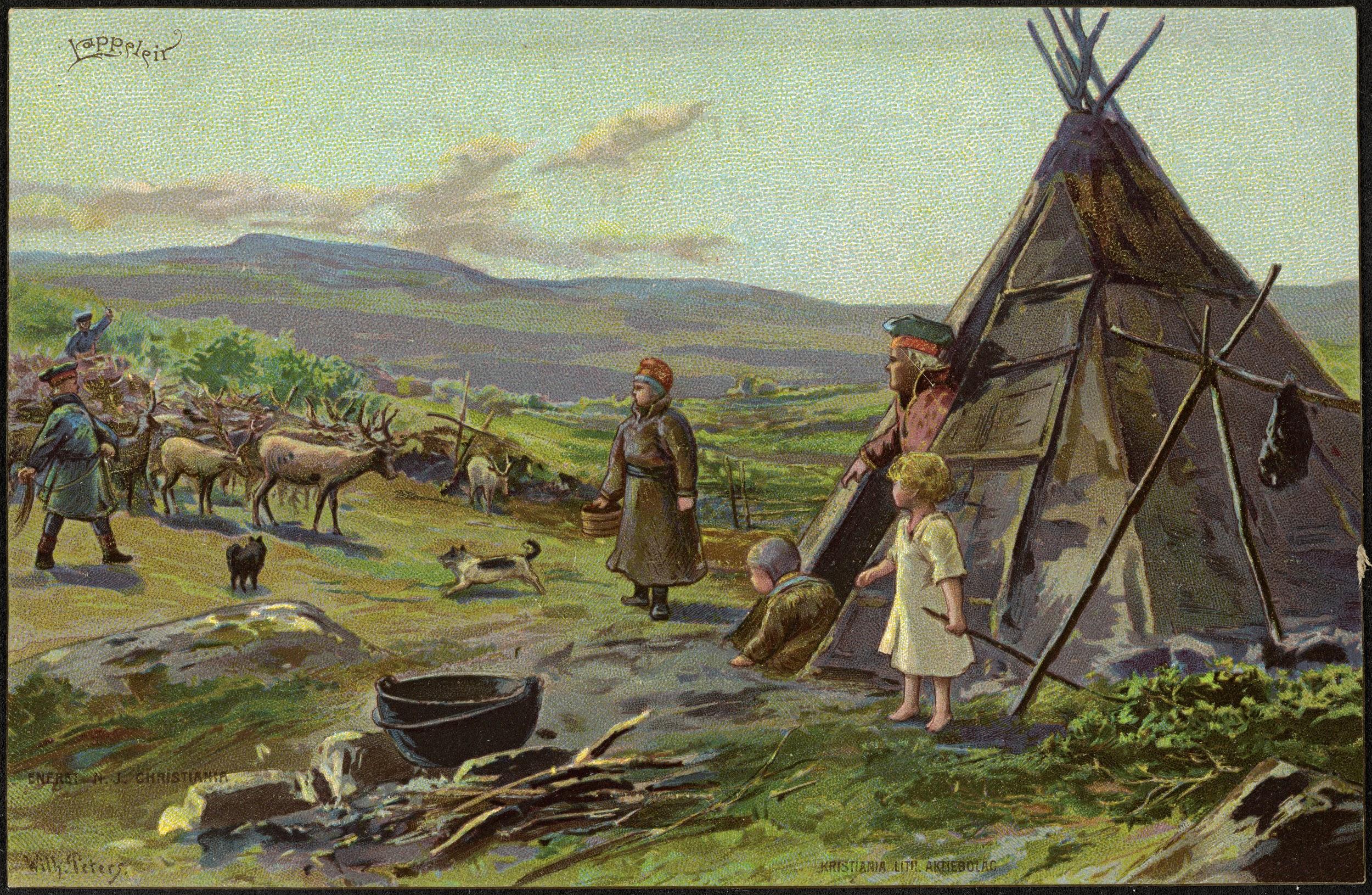 The lavvu is the most recognized type of Saami home. It was traditionally used by Mountain Saami families as they migrated with their reindeer. A typical tent stands around 20…

The lavvu is the most recognized type of Saami home. It was traditionally used by Mountain Saami families as they migrated with their reindeer. A typical tent stands around 20 feet tall and can hold six to eight people. They are similar to the tipi of North American Plains Indians and the chum of Northern Eurasian reindeer herders. A lavvu is slightly shorter and rounder than the average tipi.

Lavvu needed to be lightweight and easy to assemble. Reindeer pulled the materials along on sledges. When it was time to make camp, herders erected large structural poles ringed by smaller branches. They then wrapped the cone in reindeer hides and sheets of birch bark, secured by ropes or strips of sinew. A hole was left at the top for smoke to escape. Inside the tent, family members gathered around a central hearth, the floor covered in reindeer furs.[1][2]

The lavvu is the most famous Sami dwelling, but it was only used by people on the move. At other times, Sami people occupied more permanent housing like the goahti. A goahti is similar in shape to the lavvu but generally larger and more stable. It could be covered in wood, turf, or skins. The Forest Sami specialized in goahti and built wooden storehouses on stilts. Elevating their supplies protected them from bears and other animals while away.[3]

Like the goahti, a gamme is a semi-permanent residence. They were built by Sami people of every lifestyle. Coastal Sami lived in the gamme year-round until moving into Scandinavian-style housing. Mountain Sami kept two huts at their winter and summer settlements. They moved between the two throughout the year, staying in their lavvu while in the field. Gamme are supported by curved wooden poles forming a dome. The dome is then covered in sod and allowed to grow over until it blends into the countryside.[1][4]

Space and Worship in the Home

No matter which house they stayed in, Sami families were aware of space and their expected positions in the home. Children ate and slept on the left side of the tent, and their parents on the right. Men sat closer to the back of the tent with their weapons and drums. Women occupied the front with their loom and other tools.

The division of men and women in particular corresponded to sacred areas within each home. The back of the house was the domain of Juksakka, the bow woman, who decided which children would be born male. Men went through a backdoor to worship or bring in meat and firewood. The front belonged to Uksakka, a goddess associated with menstruation and children. At their center was Sarakka, the fertility goddess of the hearth worshiped by both men and women.[2]

Today, most Sami people live in Western-style homes. Many continue to use lavvu tents made from modern materials when camping or herding reindeer. Others incorporate traditional design elements like turf roofs into their houses. Larger projects tend to incorporate symbols of Sami identity, particularly the iconic silhouette of the lavvu. The Sami Parliament of Norway is a particularly striking example of modern Sami architecture.[5]