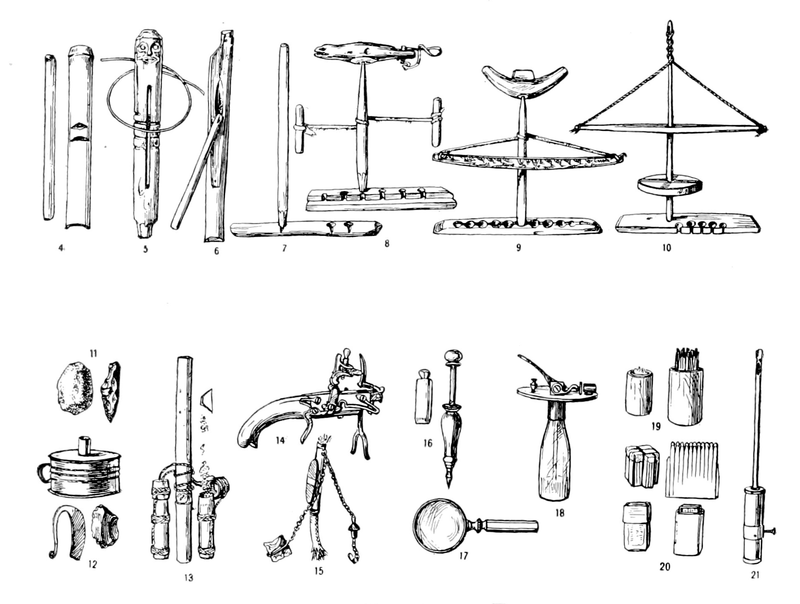 A comparison of the differences and similarities of fire creation methods from cultures around the world.

Oliver Price
/
Traditions of the Ancestors

Throughout history, fire has been a key tool to protect us from dangers as diverse as wild animals, human attackers, and even food-borne illnesses. Fire holds great significance to cultures across the globe, creating many legends about how it came to be a friend, tool, and gift to humanity. It is theorized that it has shaped our very evolution as a species. There are many ways to look at how fire intersects with culture and helped to create the world we currently live in. Perhaps the simplest, but most useful, is how different cultures have learned to produce it.

Fire needs three things to survive: spark, oxygen, and fuel. While oxygen is nearly everywhere, the fuel and method of sparking vary greatly by region. These methods depend heavily on local resources, and human ingenuity has yielded some incredibly diverse processes and tools. There are four principal methods of fire creation around the world, into which the fire-making of nearly all cultures can be categorized.

Naturally occurring fire is how humans first came into contact with flames. Fire occurs naturally as a result of volcanic activity, spontaneous combustion, lightning strikes, and even from meteor impacts.

Friction is one of the most iconic and widespread methods of primitive fire making. Examples of these methods include bow drills, hand drills, and fire ploughs. All of these work by rubbing two pieces of wood or wood and another hard material together, until an ember is formed and tinder delicately added. Some culture-specific methods of friction fire creation are as follows:

Maori people used a stick and groove method to create fire, which differs from the hand and bow drill methods highlighted elsewhere. This method is also known as the fire plough. A stick is pushed hard and fast against a groove in a board, only in one direction, creating a semi charred flammable dust that ignites easily.

Zulu people have historically used a friction-based method utilizing a fire stick and teamwork to take some of the frustration out of what can be a labor intensive process. This is described in the 1882 book Zululand And Cetewayo by Sir Walter Robert Ludlow:

“The way in which fire is produced is very clever. In nearly all the huts we visited, several fire sticks were hung up in the roof. They are about the thickness of a man's thumb and slightly charred, one being about a yard long and having the end pointed, the other shorter and thicker with several shallow holes into which the pointed stick fits. In using these sticks the Zulu squats on the ground and holds the smaller one firmly grasping the bottom end with his toes; he then inserts the point of the longer stick in one of the holes and twirls it rapidly round with the palms of his hands. The exertion is so violent that the perspiration streams off him. Gradually fine wood dust is produced in the hole, then a slight smoke arises. Another Zulu beside him receives the smouldering wood dust in a little ball of shredded grass which, quick as lightning, he introduces into a larger ball of dried grass, and whirling both round his head rapidly, they burst into a flame. It is very difficult for one man to produce fire as the exertion is so great. Two generally sit opposite each other, and when the first has brought the palms of his hands down to the bottom of the rod, the man opposite to him is ready at once to twirl it, so that the friction is not lost for an instant.”

The ancient Egyptians utilized a more advanced drill using a bow and cordage to turn the spindle. A bearing block is held on the top of the spindle to increase pressure and friction as it spins in the fire board. The Egyptian bow drill is still made today by those who practice primitive fire making skills. The drill for fire making was later adapted to be used for drilling holes in wood and stone, making many of the achievements of Egyptian civilization possible. 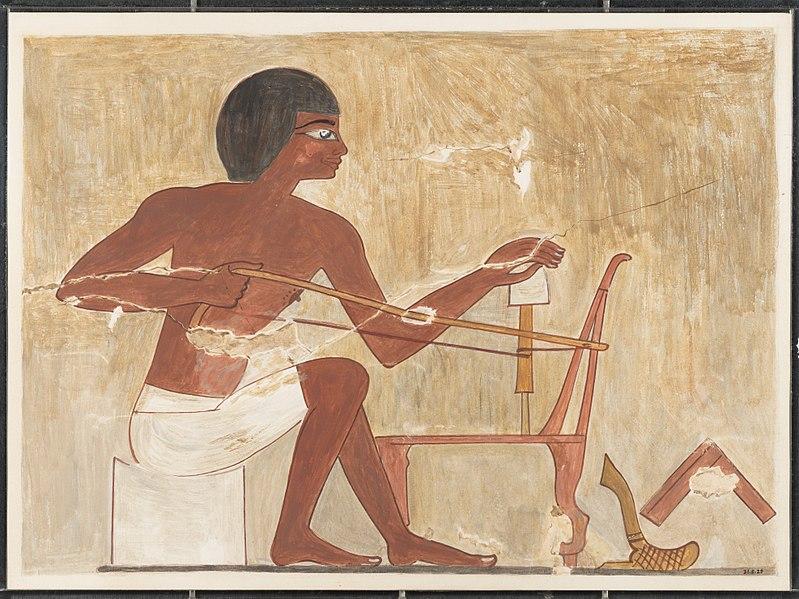 Aboriginal Australians from Southeast Australia used a variety of different friction-based methods to create fire and often used other items from their daily life as part of their fire making tools. Instead of having a dedicated fire board to turn their hand drills in, they would use other objects such as the edge of their shields and spear throwers. Some groups used flower-stalks of the grass-tree as shown below, as substitute for wood for their fire tools. 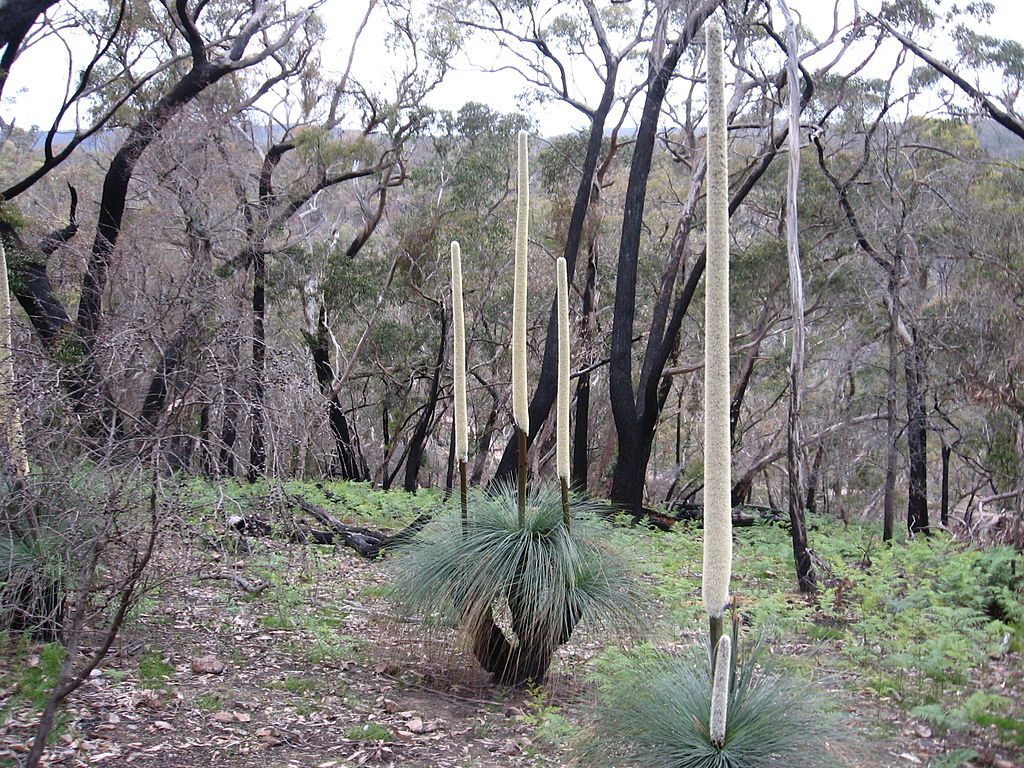 This method is characterized by striking a piece of a hard rock like flint against a piece of metal to spray sparks at collected tinder. While this method was discovered and used all over the world, we will focus on just a few cultures. The key differences being what type of stone was used and the preferred carrying method.

European percussion fire starting is most easily represented by the wide variety of tinderboxes that have been developed across its nations. Every well stocked firebox would hold a flint, dry tinder, and a fire steel. A fire steel is different from any other metal, as it is made of high carbon steel. It is very difficult to obtain sparks from ordinary steel. 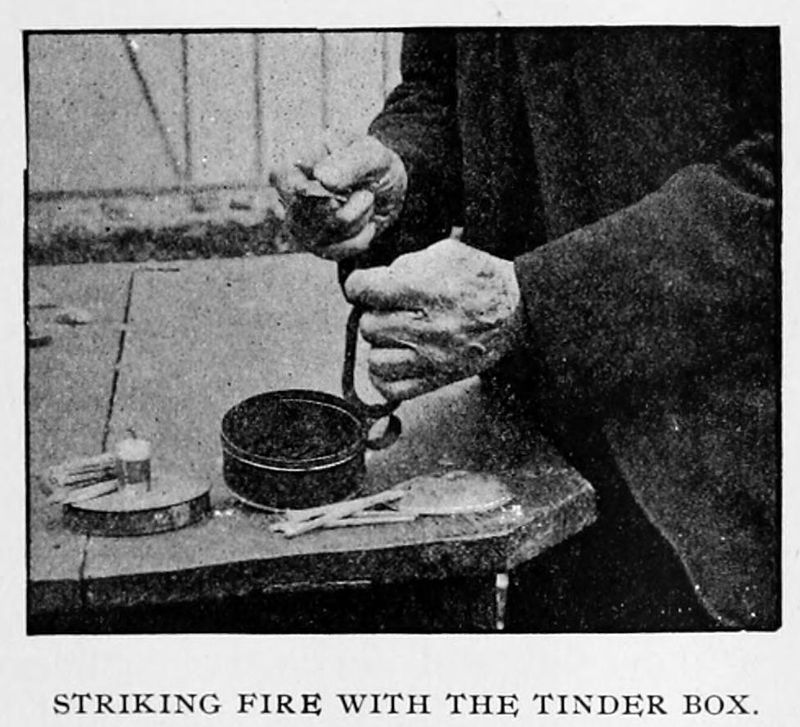 Both of these cultures use an ornate leather pouch known as a chuckmuck as their tinderbox. The pouches have metal components on the outside for striking against. Inside the pouch is where the flint and tinder is held. These decorative and useful pouches would hang off the belts of the people of Mongolia and Tibet and vary widely in decoration and design.

This method of fire creation uses specially made cylinders to trap air as it is rammed through a tube, creating temperatures of up to 400 degrees Fahrenheit to ignite tinder and form an ember. The cultural examples of air compression fire-starting are interesting, because “fire pistons” were developed independently in Southeast Asia and in Europe. Fire pistons may have been the inspiration for the diesel engine, as they work on a similar principle.

In Europe the fire piston was accidentally developed in 1745 by the Abbot Agostino Ruffo in Verona, Italy while testing an air gun he was building. They later became popular in the rest of Europe until matches were developed.

The exact time of the fire piston’s development in Southeast Asia is unknown, but its use was widespread. Evidence of their use has been found in the Philippines, Thailand, Sumatra, Laos, parts of Malaysia, Myanmar, Borneo, Sumatra, and Java. The materials of construction include bone, horn, metal, bamboo, wood, and ivory.

There are countless other variations of fire making, each as unique as the cultures that discovered them. As this article shows, however, there is both great variation and great similarity in how cultures created fire. Using what they had available, humans learned to use fire, control their surroundings, and change their own evolutionary trajectory. Many theorize that the invention of fire allowed us to soften our food and add more calories to our diet, which may have allowed our jaws to grow smaller. This in turn made room for our brains to grow larger over the course of our evolution. We may have learned to shape fire, but it appears fire may have also shaped us.

Oliver Price
Traditions of the Ancestors