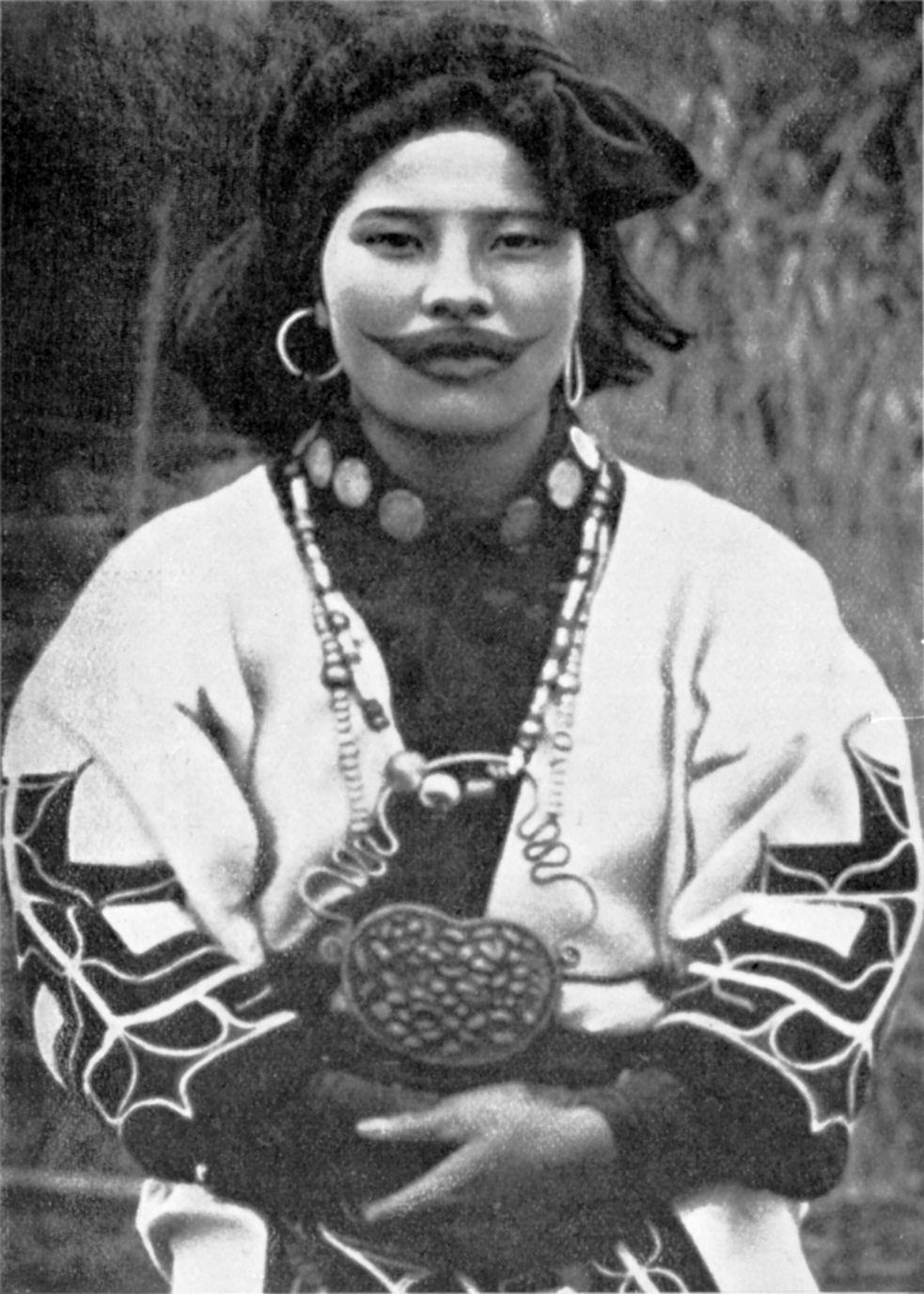 That the Ainu women tattoo their lips and arms, and in some districts their foreheads also, has been reported often. The men, however, never tattoo themselves.

That the Ainu women tattoo their lips and arms, and in some districts their foreheads also, has been reported often. The men, however, never tattoo themselves. It is an absurd habit! and does not add to the beauty of the people. Nor have I yet been able to get any simple, direct, and sensible reason as to how the custom arose, or why it is kept up. The tattoo is of a bluish-black colour, and the process of getting it in is both simple and painful.

It is accomplished in this way. Some birch bark is taken and put into a pan to soak. Next a fire is made and an iron pot hung over it. After this some more birch bark is brouqht and burnt under the pot till the bottom is well blackened. When this has been thoroughly done, a woman takes a sharp knife, cuts a few gashes into the part to be tattooed, then takes some of the soot from the pot on her finger and rubs it well in. She next takes a piece of cloth, dips it into the decoction in the pot, and with it washes the part operated upon. In children the centre of the upper lip receives the first touches, then the lower lip, and so on alternately till the tattoo reaches almost from ear to ear.

It has been said by some that the Ainu learned to tattoo themselves through seeing the women of the ancient pit-dwellers, mentioned in the last chapter, who were so tattooed. They thought it very beautiful, and thus imitated them for the sake of ornamentation. But this explanation is not generally received. Indeed, the following legend bearing on this very point was given me against the theory.

'The pit-dwellers were a very little people, and were not tattooed at all. The Ainu made war upon them, and took many of their women prisoners. When they brought them home they tattooed them in the same way as their own wives were tattooed, so as to distinguish them from others of that race. All the smaller Ainu are descended from these women.'

A better legend concerning the origin of this custom runs thus: 'When the divine Aioina and his sister came down from heaven the latter person was tattooed, and before her departure hence she introduced the custom among the Ainu women.' This is a short legend, to be sure; but it is quite enough to satisfy the Ainu, though to us it may be a simple begging of the question.

The reason given by some for tattooing is contained in the following lore: 'There is a good deal of bad blood in women which must be taken out. Tattooing was therefore introduced, and is still kept up, as a means of letting the blood escape, and thus making the body strong.'

Upon inquiring why the tattoo should be placed on the mouth and arms rather than elsewhere, I was informed that, to quote the legend bearing on this point, 'The tattoo marks are placed especially upon the lips and arms, because they are the most conspicuous parts of the body. They are put there in order to frighten away the demon of disease. Now the wives of the heavenly deities are every one of them thus tattooed, so that when the demons come, and find that the Ainu women are marked in the same way, they mistake them for goddesses, and forthwith flee away.'

That the people really imagine tattooing drives away disease and strengthens the body by letting out bad blood, the following lore places beyond all doubt:

'When the eyes of old women are growing dim and they are becoming blind, they should retattoo their mouths and hands, that they may see better. This custom is called by the name pashka-oingara i.e., "looking over the tattoo." I am well acquainted with one old lady who actually tattoos herself quite frequently, in order to strengthen her eyesight.

Another piece of lore says: 'Should contagious disease strike a village, all the women should tattoo one another, to drive the demon away. This custom is called upash-hura-rakkare i.e., "making each other smell of tattoo."

I have often tried to get this dreadful custom done away with, but have found the people too much given to the superstitions connected with it to accomplish much. Still, something has been done, and the people are beginning to see the uselessness as well as the barbarity of it. The women are, as a rule, very careful to so teach their daughters that they shall be afraid to discontinue the custom.

Their method of intimidation takes the form of a legend, and runs thus:

'The divine sister, the sister of Aioina, has taught us that if any woman marries a man without first being tattooed in a proper manner, she commits a great sin, and when she dies will go straight to Gehenna. Upon arrival there, the demons will take very large knives, and do all the tattooing at one sitting.' This frightens the girls very much indeed, for tattooing is a painful process.

It is not the women only who insist on having the girls tattooed, but the men also have entered into the conspiracy. The verdict of these wiseacres is this: 'Untattooed married women may not take part in any feast, for to do so would be dishonouring to gods and men alike. Indeed, it would bring down the wrath of heaven upon both them and all the assembled guests.'

What then, it may be asked, is likely to be the significance of this custom? I am quite convinced in my own mind that it means neither more nor less than taboo, or prohibition, though the Ainu appear to have lost this idea now.

I have on various occasions been called upon to arrange marriages for the people, and whenever things have been properly settled I have noticed that the bride goes and finishes her tattoo round the lips, which is never completed till one has been really betrothed; and when the tattoo is finished all men know that she is either a betrothed or married woman. She is, indeed, 'set apart' for some particular man- she is engaged; nay, really married. Her tattooed mouth must now speak only for her husband, and her tattooed hands and arms must henceforth work for him alone.

It is curious to remark in connection with tattooing that the Ainu fancy they can see tattoo marks on frogs resembling those made on the women. The following legend concerning the origin of these creatures is peculiar, to say the least, for it tells us that their first parent was neither more nor less than a woman who was cursed by God, and had her bodily form changed, on account of her great wickedness.

He metamorphosed her as a punishment, and her human spirit was turned into that of a demon. All that was left to show that it had once been a woman, were very slight traces of tattoo marks, which may still be seen, if one will take the trouble to look carefully on the legs (hands) of the frog.

'In ancient times there was a man and a woman who became husband and wife. After the first few months they did not get on well together, because the woman was discovered to be a bad character, and proved undutiful to her husband. She was also disobedient to her parents, and in the end bewitched them so that they both died. In course of time she married no less than six husbands, every one of whom she soon killed. God observed all this, and was very angry with her, so that He punished her by turning her into a frog, and throwing her far away into a marsh.

At the same time He said to her: 'O thou wicked woman, I indeed made thee good in the beginning, but thou hast lived an abominable and iniquitous life; thou hast not only slain thy father and mother and husband, but others besides. I am therefore now going to turn thee into a frog; thou shalt henceforth live in the marshes, lakes, and ponds, and thou shalt become a fiend. Thou shalt spawn young frogs, and hop about amid the slime of the most filthy places. If thou dost venture into the dwellings of men they will without more ado knock thee on the head, and throw thy dead carcase away."

'So spake God. And this then is a true account of the origin of frogs; any person will find, if he examines them closely, that their feet are slightly tattooed, like the fingers of a woman. It is because a woman was the ancestor of these creatures that they have the marks of the tattoo left. Now, there are some people who, out of sheer pity, say in so many words that frogs are divine; but they are not so in reality, for they are demons, and something akin to ghosts. Yet, as they were once human, and followed the customs of men and women, they still go to the Japanese of the main island every winter and do their marketing, and when they return eat, drink, and make merry in their dwelling-places. This is the noise one hears in the spring when they cry, Ooat, ooat!