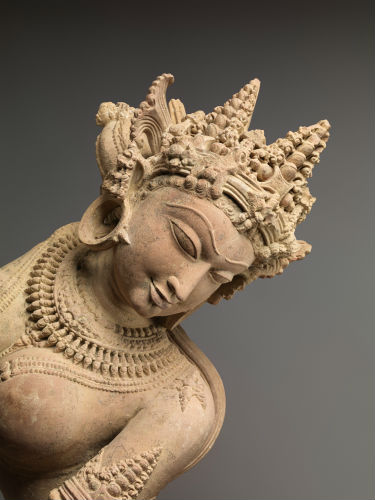 Explore the artistic and musical history of India.

India’s many civilizations have contributed to its long and celebrated art history, a tradition dating back thousands of years. Like other cultures, the majority of traditional Indian art was religious in nature. Hinduism, Buddhism, Jainism, and later Islam all played a major role in the subjects and styles of its artists. Additionally, early neighboring cultures like the Greeks and Romans left a lasting impact on Indian aesthetics. The region is especially noted for its achievements in sculpture, architecture, textiles, ceramics, metalwork, and painting. In addition, each state is home to its own rich musical traditions, both religious and secular.

Pottery and Sculpture in Indian Art

Most of India’s earliest art has survived in the form of stone, terracotta, and bronze-cast statues. Sculptures were often integrated into ancient temple architecture, depicting deities, humans, and animals. Buddhists tended to show statues of of the Buddha in meditation, a custom that spread through much of the Buddhist world. Hindu works focused on gods and divine beings, often with associated symbolic imagery. Sacred centers like Mathura in modern Uttar Pradesh showcase Indian art and architecture from ancient times to the modern day.

India has been a major source of textiles since its earliest civilizations. Cotton was first domesticated within its borders around 5,000 years ago. The Harappan or Indus Valley civilization also grew ramie, a type of nettle, and hemp, as well as raising sheep for their wool. Cotton dominated Indian markets and exports until the introduction of silk from China. This occurred in the early centuries CE. Indian weavers soon learned to work and dye the textile, producing their own clothing and fabrics. Other imported textiles include linen and jute.

During British colonialism, India became a major exporter of cotton. Technologies like the cotton gin, an American invention, and factories significantly improved output but also moved Indian textiles from art to industry. Both traditional crafts and mass production are now practiced in India. 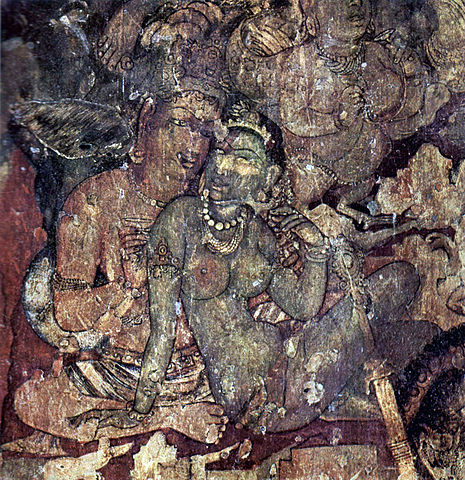 Painting and Calligraphy in India

Painting is another old Indian art, though most pre-Islamic paintings have been lost to time. The majority of those that have survived are found in cave temples. The Buddhist art of the Ajanta Caves, for example, contains elaborate wall paintings and frescoes from the 2nd century BCE on. Similar murals were produced to depict Hindu and Jainist themes as well.

In the 11th century, Muslim rulers brought a new style of painting to India: medieval miniatures. Their illuminated manuscripts combined both Persian and Indian techniques to create a unique school of art. These paintings reached their height under the rulers of the Mughal Empire, many of whom patronized the arts. As the techniques spread, artists in many courts began painting both their kings and religious subjects. Rajput paintings grew to be distinct from those of the Mughals, reflecting the differences in taste and culture between the smaller Indian states. The full scope of Indian painting, particularly differences between the North and South, is too extensive to be described in brief.

British colonialism brought further changes to the schools of Indian art. Western techniques combined with Indian and Mughal styles. Indian painters built on all three during the independence era, expressing nationalist ideals through their paintings. The Bengal School of Art worked to both grow and preserve Indian painting in the early 20th century. At the same time, folk art survived on a local level, sometimes unchanged for centuries. 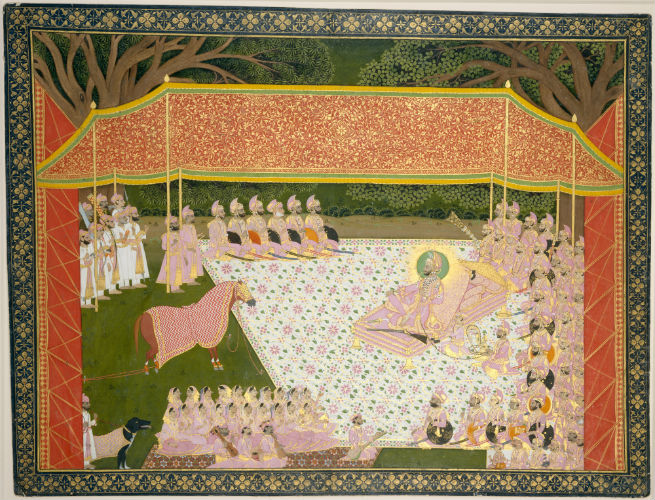 The music of India is as old and diverse as its other arts. The earliest surviving music from the region can be found in the Samaveda, which is roughly 3,000 years old. It contains the hymns used by priests as they conducted sacrifices and other ceremonies. These songs formed a foundation for later Hindu musical traditions. Their most important elements are ragas, or melodies setting the mood of a piece, and talas, which set the meter. During the medieval era, Persian and Turkic musical forms mingled with existing Hindu music. The sitar and tabla were introduced at this time. Other common instruments in Hindustani music include the sarod lute, shehnai woodwind, and sarangi fiddle.

A separate musical school, based on shared roots, developed in Southern India by the 15th or 16th century. Karnatak music saw less Islamic influence and uses fewer instruments, relying more on vocal performances. It remains closer to the older forms of Vedic music, though it has grown and changed in its own right.

Modern India is home to artists working across all media. Today, the nation is famous for its film and music industries, which have produced many celebrity actors, actresses, and pop stars. Its population of over one billion people, along with foreign markets, support a healthy art scene ranging from contemporary painters, writers, sculptors, playwrights, photographers, and musicians to folk artists continuing regional customs.