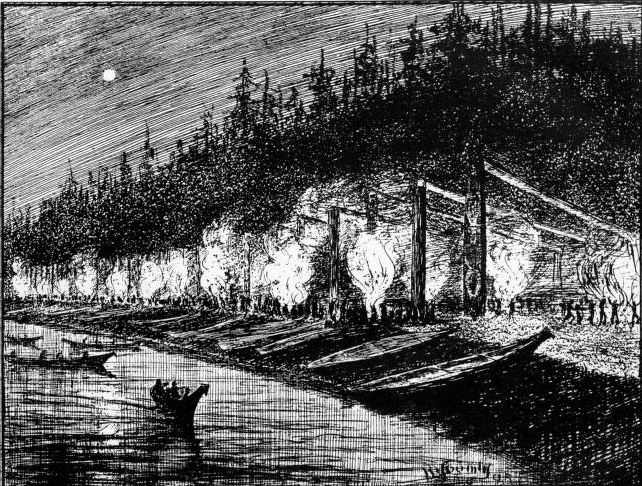 "The history of the Old-Man-House, or as the Indians called it, Tsu-Cub, possesses peculiar interest, which distinguishes it from almost all other Indian architecture in the New World. If it…

From Chief Sealth by Frank Carlson, 1903.

The history of the Old-Man-House, or as the Indians called it, Tsu-Cub, possesses peculiar interest, which distinguishes it from almost all other Indian architecture in the New World. If it were possible to unravel fully the history of the people who built and frequented this house, we would undoubtedly have a history as full of romance as the story of Troy, so beautifully described by Homer.

This magnificent house was situated at Port Madison Reservation on the beach of the northwest side of the Agate Passage, just where the water separates from Admiralty Inlet to form Bainbridge Island—it is about twenty-five kilometers northwest of Seattle. It was an ideal location for an Indian village, only a short distance of about one thousand feet across Agate Passage to Bainbridge Island on the south; on the north and west was land and on the east the mighty arm of the Pacific. Besides they could take advantage of the incoming tide and float southward to any destination with rapidity and return with the outgoing tide.

The ground-plan of this house is still traceable, although there is only one post standing; all the others have rotted off where they entered the surface of the ground, and then been washed away by the tide or burned by the Indians; but that part which remained in the ground is in perfect preservation, and shows plainly the location of the house. 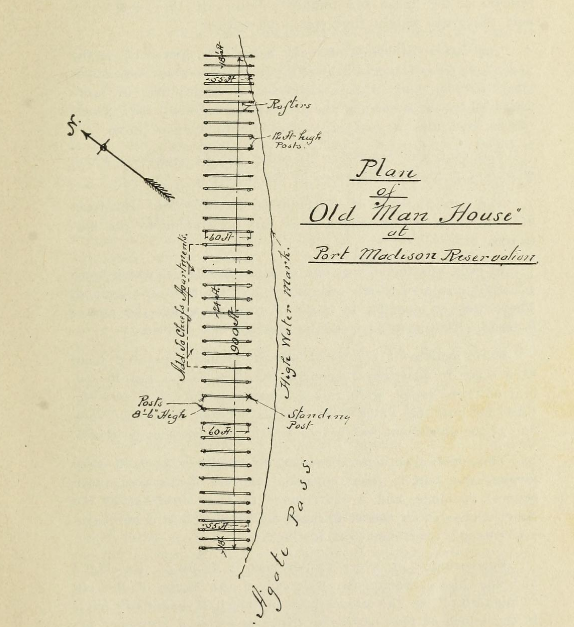 In front, the outline of the house measures about nine hundred feet, in the rear a little less, as the house curved somewhat to correspond with the beach. In width, it measures about sixty feet, with the exception of a short distance at each end of the house, where it measures only fifty feet. At the north end, the rear end of a few of the rafters rested upon the bank. In height, it was twelve feet in front and between eight and nine in the rear.

It covered an area of about an acre and a quarter, containing about forty apartments, each entirely separated from the other by a partition of boards or planks split from cedar, held together by sticks fastened at the top with withes.

The total number of posts is given by Gibbs to have been seventy-four, which is about the correct number for the corner posts. The size of the posts differ; in front they were about fifteen feet long, two or four feet wide and ten to twelve inches thick; in the rear they were twelve feet long with the same width and thickness as those in front. All the posts were notched at the top and placed in position with the bark side facing the interior of the house and tamped solidly until they could support the great weight that rested upon them.

The rafters consisted of round cedar logs, hewed off at the upper side so as to make it level for the room. They were about sixty-five feet long with a diameter of twenty-four or more inches in the large end and about twelve in the small end. These rafters had also a post in the middle to support them.

The roof was covered with cedar boards (shakes), which were laid on planks that rested on the rafters.

The outside walls of the building, like the roof, consisted of split cedar planks which were put up similar to the partitions.

In each apartment was one or more fireplaces, which were generally made of stone and raised a little from the ground. There was an opening in the roof through which the smoke escaped. This opening could be closed when desired.

Each apartment contained several rooms separated from each other by mattings suspended from the ceiling, and in several of these rooms were raised bunks constructed around the walls for beds, on which were used as bedding, mats. On each end of the apartment was a door which hung on wooden hinges.

The chief apartment, occupied by Sealth, was built very strong; the wall in front consisted of very heavy posts with several openings, and a contrivance to place in front of the door in case of an attack by unfriendly tribes. In a like manner Kitsap's apartment was fortified.

Furthermore, on every corner post in front of the chief's and sub-chief's apartments, was carved the figure of the big "Thunderbird" in the proportions in which it had fixed itself in the minds of that particular tribe; and also a grotesque figure of a man, about half size, naked, and with bow and arrow. This latter figure was supposed to represent the ancestor of the tribe. There were also smaller carvings on the other front posts.

This massive house of the Indians of Puget Sound was over thirty times as large as the houses built by the mighty nation of the Iroquois, which were, according to Morgan's description, from fifty to one hundred feet long and about seventeen feet wide. 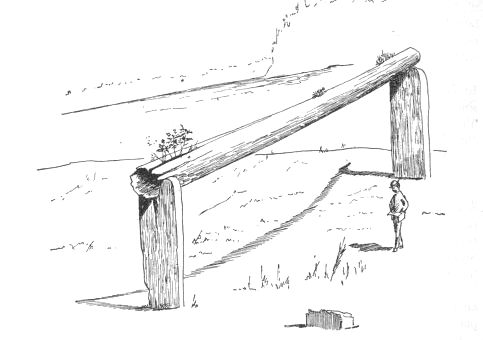 As to the time when this house was built, there are various conjectures; some claim that it was constructed about the middle of the eighteenth century by one of the tribes of the Dwamish Confederacy; others think that it was built in the beginning of the nineteenth century. The latter opinion is undoubtedly correct as Vancouver does not make any mention of the house. But the best evidence, perhaps, that can be adduced is the great mass of crushed, broken and roasted clam shells that are found to a considerable depth over every portion of the beach, even as far out as deep water.

An Indian whose name was Sub-Qualth has given the following information: "In the Tsu-Cub lived eight great chiefs and their people. Space in the big house was allotted each chief and his people and this was religiously consecrated to them and never encroached upon by others. To old Chief Sealth was given the position of honor; Chief Kitsap next, Sealth's aged father ranked third, and Tsu-Lu-Cub came forth. These four Sub-Qualth remembered as they represented one half of the Tsu-Cub. The next four Sub-Qualth did not remember, but his father, who was a cousin of Chief Sealth, had told him their names. There was Bec-kl-Ius, Ste-ach-e-cum, Oc-ub and Lach-ema-sub."

That the Old-Man-House was originally built for a Potlatch House there is no doubt, but it was also used as a residence for part of the year. It was chiefly used for that when the whites came.

Directly across from the Old-Man-House is located at Point Agate, perhaps, the only permanent record of these tribes. Upon the flat surface of the rock is engraved characters of different descriptions whose meaning neither the whites nor the Indians have been able to interpret. This engraving is said to have been done by the Tamahnous Man.

A place to share our love for Washington, its people, and its history.